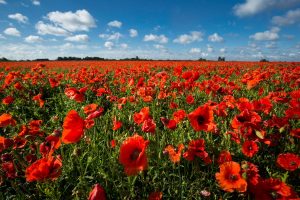 Remembrance Day takes place annually on the 11th of November. It is commemorated by the whole of the nation who pause for two minutes silence to remember the soldiers who have fought or are still fighting in combat.

Remembrance Day (also known as Armistice Day) marks the day when World War One ended on the 11th hour of the 11th day of the 11th month in 1918. You may be wondering why people wear poppies on Remembrance Day? The answer is, this flower grew on the battlefield after World War One ended. As a result, the poppy has now become a symbol to remember those who lost their lives during conflict around the world and those who have been killed due to terrorism.

On this day, ceremonies are held at churches, cenotaphs and war memorials across the country and abroad. The Royal Family and important politicians also gather at The Cenotaph in Whitehall, London for a memorial service. 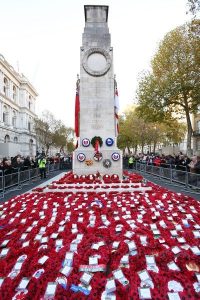 Poppies and poppy wreaths laid at The Cenotaph, London.

Locally, a Remembrance parade is held annually at the Walsall Cenotaph. Many different groups participate including: Army Cadets, Air Cadets, Sea Cadets, Guides, Brownies, Rainbows, Scouts, Cubs, Beavers and many more. They sing hymns and listen to speeches and stories from the Bible. During the procession, they also salute and pay respect to the Mayor.

What do you do each year to remember the fallen soldiers?

This website uses cookies to improve your experience while you navigate through the website. Out of these, the cookies that are categorized as necessary are stored on your browser as they are essential for the working of basic functionalities of the website. We also use third-party cookies that help us analyze and understand how you use this website. These cookies will be stored in your browser only with your consent. You also have the option to opt-out of these cookies. But opting out of some of these cookies may affect your browsing experience.
Necessary Always Enabled
Necessary cookies are absolutely essential for the website to function properly. This category only includes cookies that ensures basic functionalities and security features of the website. These cookies do not store any personal information.
Non-necessary
Any cookies that may not be particularly necessary for the website to function and is used specifically to collect user personal data via analytics, ads, other embedded contents are termed as non-necessary cookies. It is mandatory to procure user consent prior to running these cookies on your website.
SAVE & ACCEPT