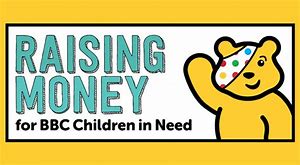 On the 15th November 2019, the whole of the UK participated in a range of fundraising events to raise for Children in Need.

Children in Need is a BBC charity organisation to raise money for disadvantaged children across the UK. Children in Need was first established in 1980, since then the charity has raised over one billion pounds!

This year, in order to encourage people to donate money towards Children in Need, popstars including Louis Tomlinson and the pop band Westlife sang live on BBC1. In addition to this, players from the England Football Team (including Captain Harry Kane) surprised children from the England Amputee Football Association and attempted to play football using crutches. 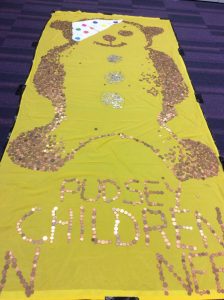 The whole of the UK raised a whopping £47million for the charity. As a school, we raised over £700- this is highest amount ever raised in school! The Year 6 Sponsored Silence was extremely successful, raising over £400. We would like to thank everybody who contributed.

By David and Matthew

This website uses cookies to improve your experience while you navigate through the website. Out of these, the cookies that are categorized as necessary are stored on your browser as they are essential for the working of basic functionalities of the website. We also use third-party cookies that help us analyze and understand how you use this website. These cookies will be stored in your browser only with your consent. You also have the option to opt-out of these cookies. But opting out of some of these cookies may affect your browsing experience.
Necessary Always Enabled
Necessary cookies are absolutely essential for the website to function properly. This category only includes cookies that ensures basic functionalities and security features of the website. These cookies do not store any personal information.
Non-necessary
Any cookies that may not be particularly necessary for the website to function and is used specifically to collect user personal data via analytics, ads, other embedded contents are termed as non-necessary cookies. It is mandatory to procure user consent prior to running these cookies on your website.
SAVE & ACCEPT